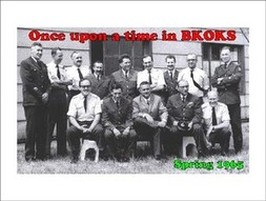 BAFARA, founded at COXYDE AIR FORCE BASE in the spring of 1968, is an association of
“Air Force Minded People”, who have a common  interest  in radio-amateurism and in general in electronics.

The Association is open to:

The radio amateurs of the former Air Force (now Air Component) where the pioneers, who started the Association after an initiative  of the then Captain (later to be Colonel) Paul DE RO, ON4PD, who became the first president.

They were about fifteen operators and technicians, keen to promote their hobby in the Belgian Air Force.  Their first club station  obtained the call ON6AF.  Their activities had in reality already started with their participation at the “Aerospace Electronics” fair at MELSBROEK Air Base in 1967.  Similar activities were going to be the main purpose of  ON6AF: participation at air meetings, open doors, expositions (like the Holiday Fair), promoting  radio amateurism.

In the mean time  the number of club stations had grown: ON6AP at the 10th Wing at KLEINE BROGEL, ON6BK at COXYDE AIR BASE and ON6CZ at ATCC SEMMERZAKE had been added,  and in 1989 ON4BAF was started at the Royal Technical School  of the Air Force at SAFFRAENBERG.  This last station was of particular interest, as it is the ideal place to expose the candidate specialists in electronics to  the hobby, especially in view of the declining number of young radio amateurs.  Still later, a last club station , ON4BFS, was started at the 2th Wing in FLORENNES.

ON4PD remained in the presidential chair until September 1989.  He was succeeded for about ten years by Marc Huyghe ON1HU (now ON4BAJ) and then followed by Pierre Thirifay, ON4TYP. The actual president is Frédéric Dupont / ON7WZ.

Lately, the members in the Royal Technical School of the Air Force in SAFFRAENBERG, took the initiative to start a close cooperation with the  UBA-RST Section of  the near by town of  ST-TRUIDEN.  Together they share their knowledge with the young students  who are at the beginning of a technical career in all components of the Belgian Defense..

This cooperation  resulted  already in the initiative to organize,  in the framework of the ARISS program,  a radio contact  with the second Belgian astronaut Colonel (Flying) FRANK DE WINNE ON1DWN, during his projected space mission next November.